I like to call Missoula, MT, my sister city. When I was nine my mother drove me and my brother to Montana in an OLD Peugeot she’d bought for $75 dollars. A friend of hers got it running, my mother reupholstered the seats and off we went. It took us three days to get there, because we had to stop every half hour to put water in the radiator, but we kept our spirits high by singing You Are My Sunshine at least a thousand times—no radio!

We stayed with friends who had gotten married and moved to Missoula with their combined clan of 5 children, a visiting step-brother and, then, the three of us. The house was full to the brim with chaos and laughter and plenty of squabbles, I’m sure, but I don’t remember those. The summer was a magical blend of Norman Rockwell small town U.S.A. and the Summer of Love. It was a welcome relief from the tear gassing and riot gear that filled the streets in Berkeley. Wednesday evenings we went to the city park to listen to the local brass band that performed in straw hats in a gazebo painted white. We ran after the ice cream truck until it stopped at the curb and eagerly waited for our turn to pick a flavor. I always picked an orange creamsicle, my brother picked whatever had the brightest colors—the one that would dye his tongue the darkest.

Since then, I have spent spurts of time there—a year, a week, a weekend—and have never fallen out of love. In fact, I find something new to love about it every time I go. Huckleberries are one of the many things that draw me back. Huckleberries can’t easily be grown commercially, which makes them precious—like truffles. They are similar to blueberries, though smaller, seedier, and richer in flavor. They are slightly musky, somehow buttery, absolutely delicious, though they do benefit from being cooked. Unlike blueberries, they are quite tart. I think only grizzly bears can eat them raw. 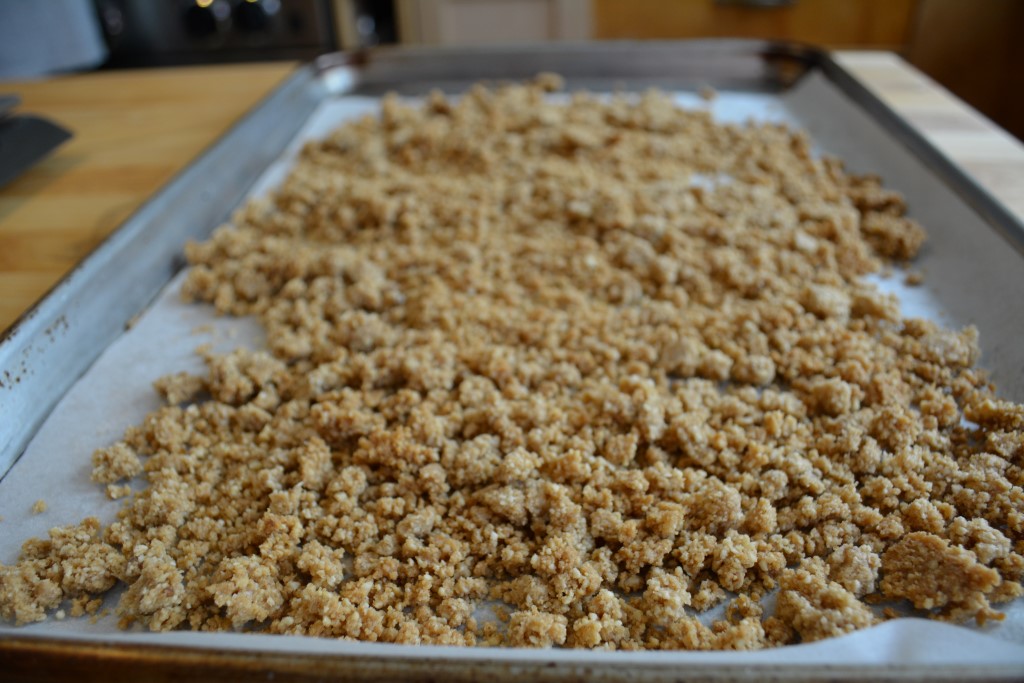 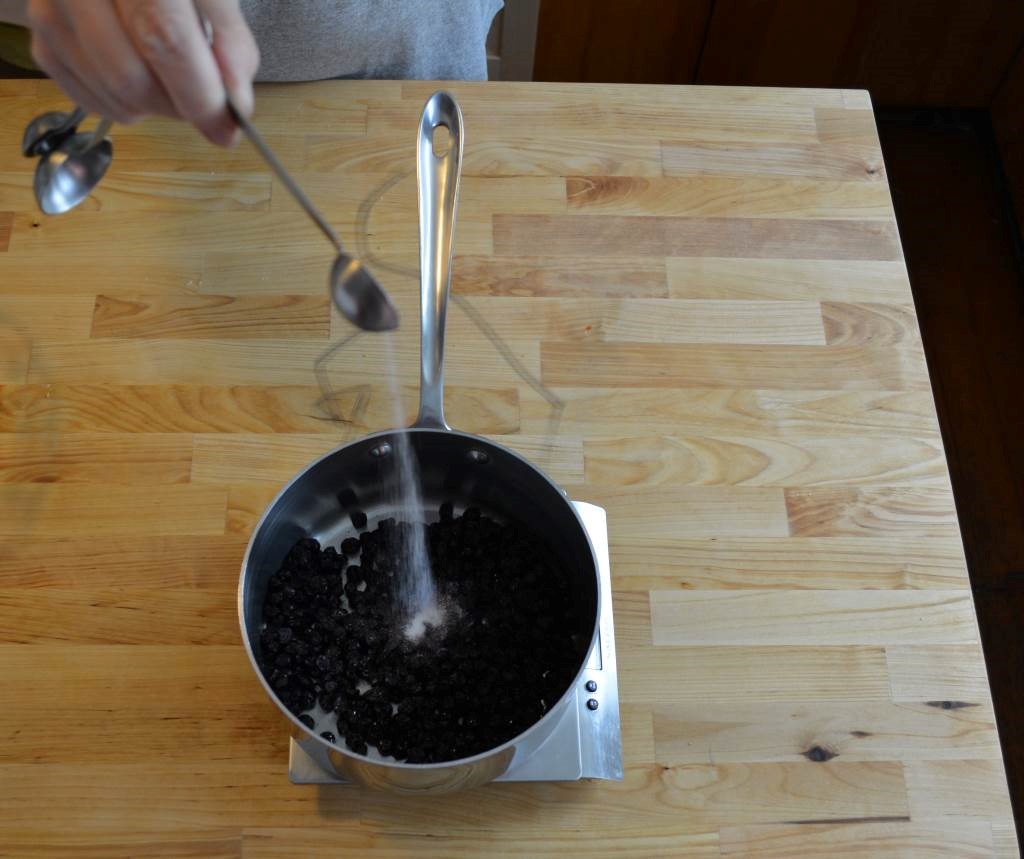 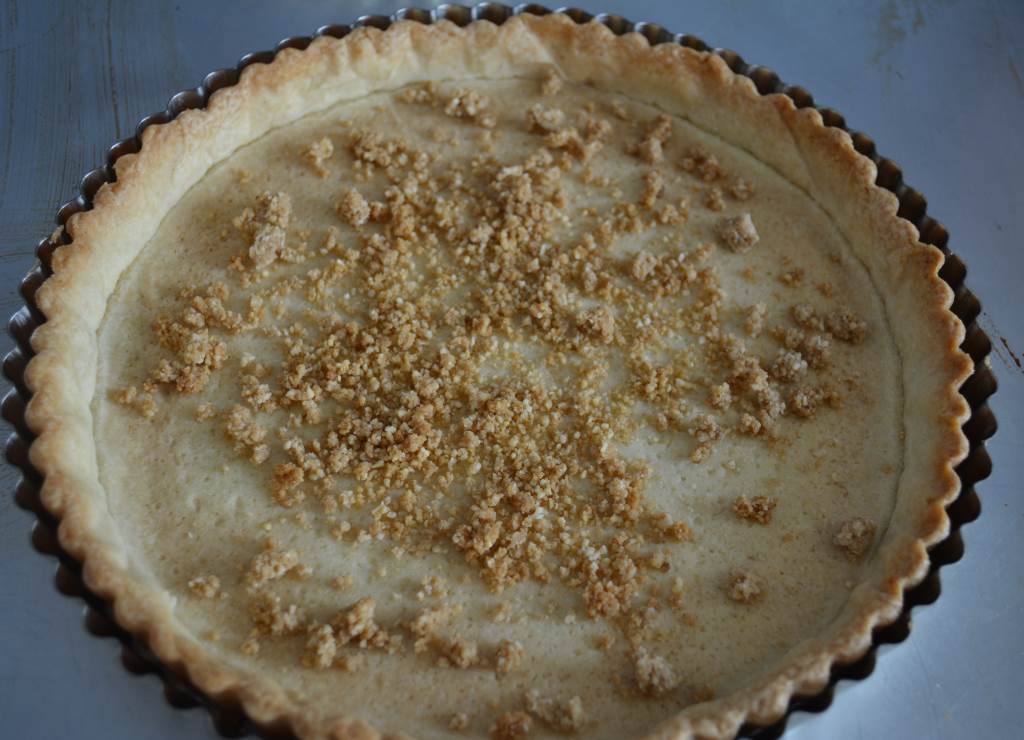 Streusel on the bottom 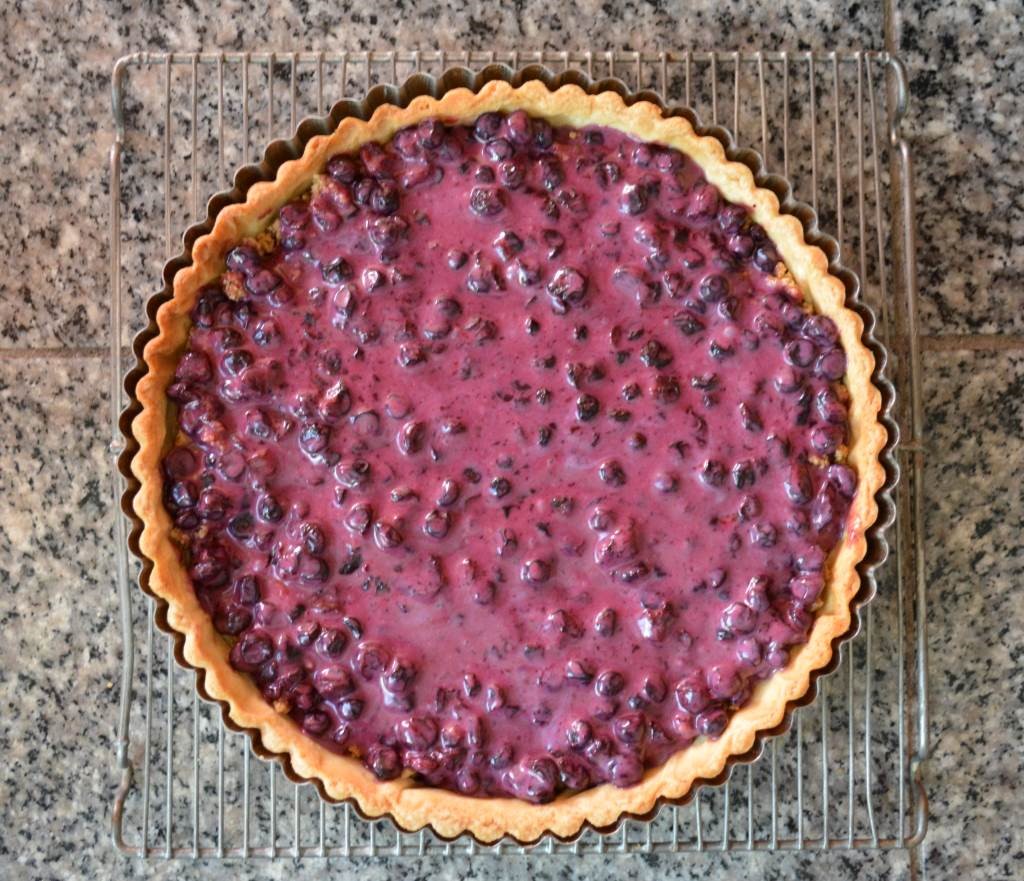 Streusel nestled under the filling to keep the crust nice and crisp. 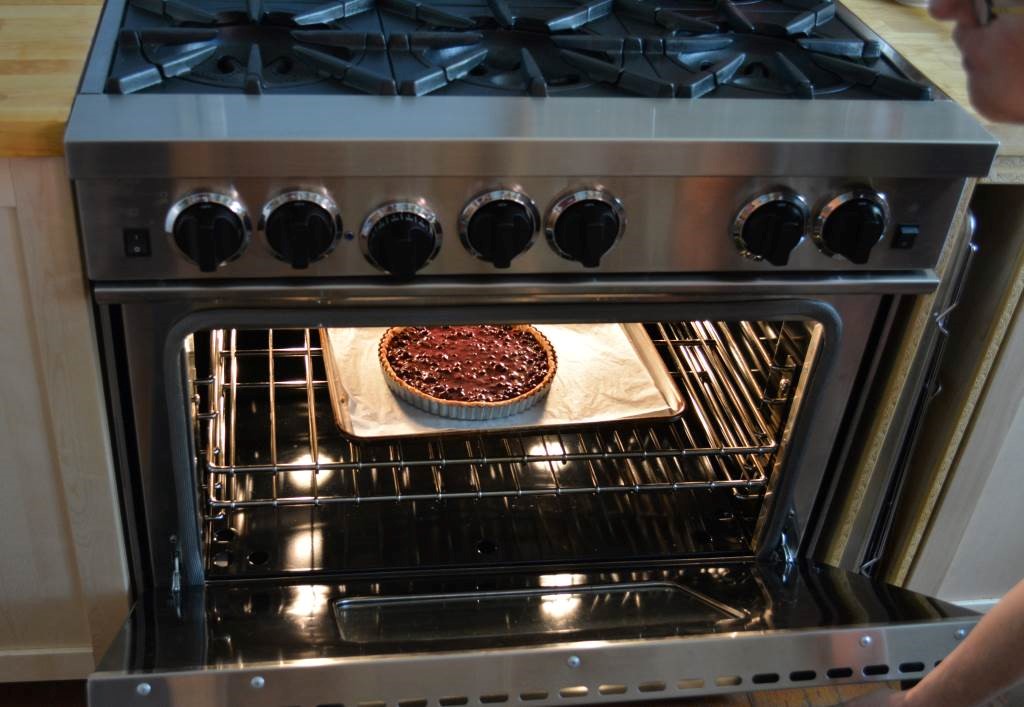 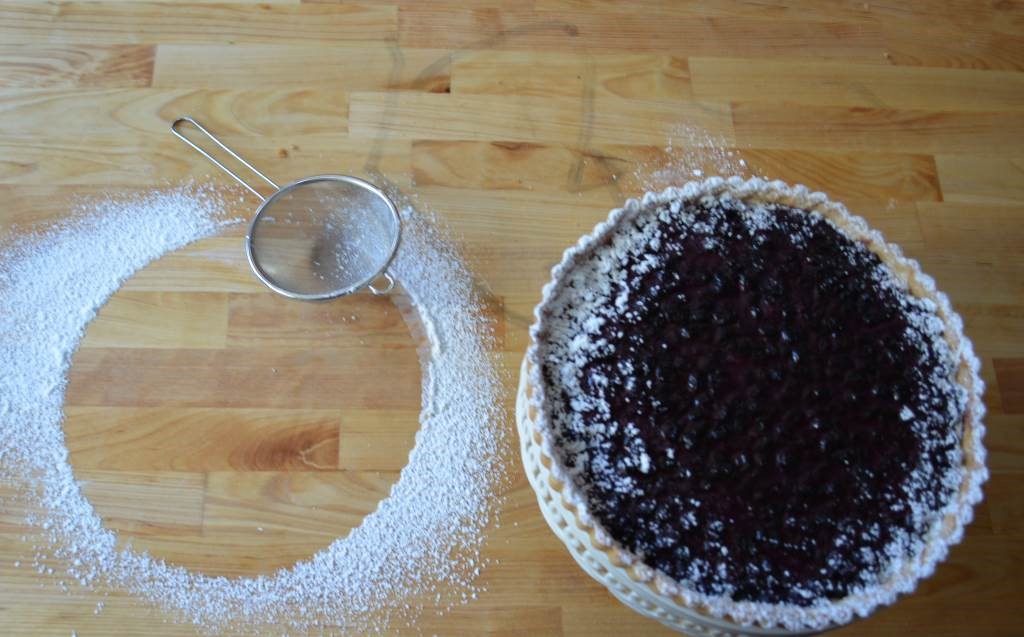 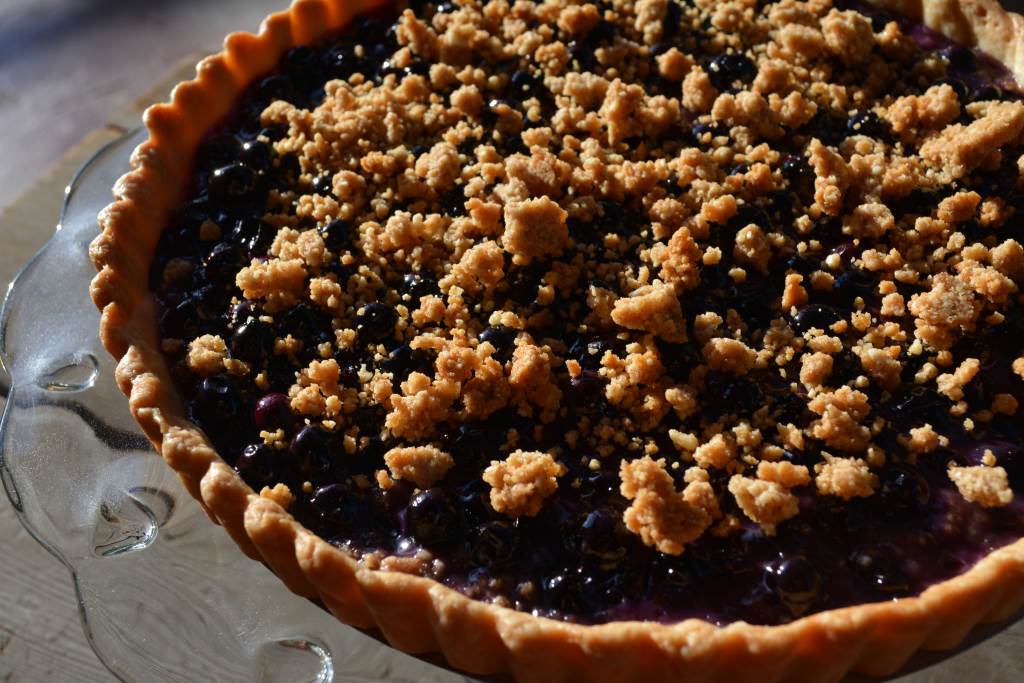 Or topped with baked streusel.

The recipe is adapted from Jacquy Pfeiffer’s baking book, The Art of French Pastry. The original recipe calls for wild blueberries which are very similar to huckleberries. Jacquy Pfeiffer warns against using commercially grown blueberries because of their white interiors, but I made the tart with grocery store blueberries and thought it was lovely–not at all disappointing. Don’t wait for wild berries! This tart is so good you’ll want to make it without making a trip to Montana. 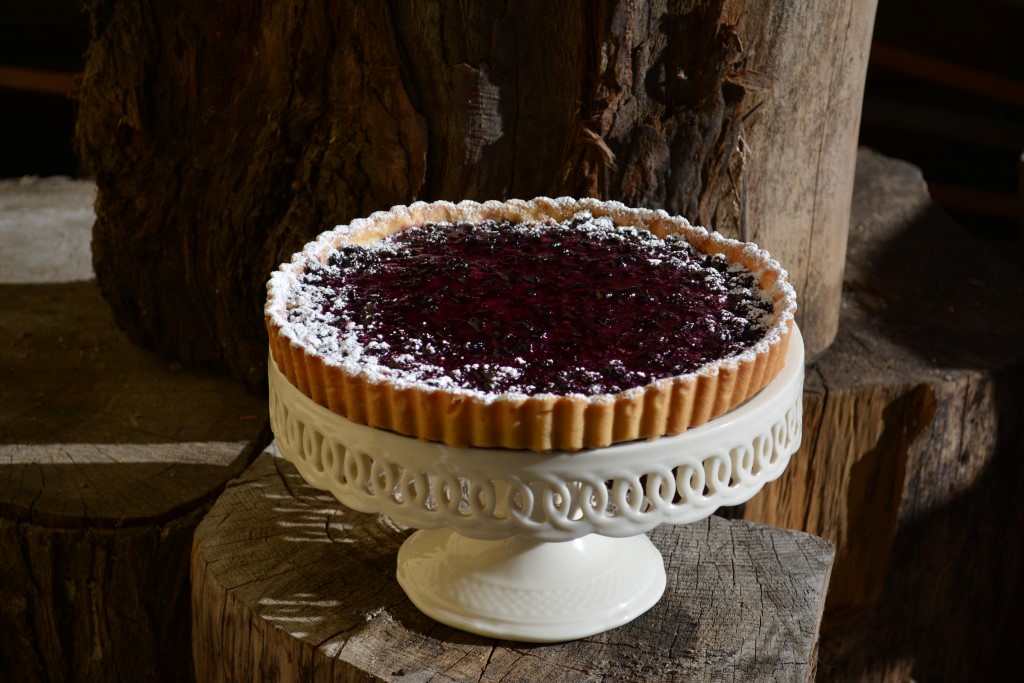 Preheat the oven to 325 degrees F. Line a sheet pan with parchment paper.

Cut the butter into ½-inch pieces. Place all of the ingredients in the bowl of a mixer and mix at medium speed until crumbly, about 2 minutes. The pieces should be about ¼ inch in size. You could also just mix the ingredients together by hand.

Spread the streusel on the parchment lined pan and bake 20-25 minutes, stirring occasionally, until golden brown and crisp. Allow to cool completely, then transfer to an airtight container and store in the freezer.

In a saucepan, combine the berries and 1 teaspoon of the sugar and bring to a boil. Turn the heat to medium low and boil for 2 minutes.

Meanwhile, whisk together the lemon juice, water, and cornstarch in a medium bowl. Gradually stir the mixture into the berries and simmer 1 minute, until thickened. Continue to simmer until thickened. Remove from the heat.

Combine the vanilla extract, egg yolk and remaining sugar and whisk together. Add the milk and cream and beat together until the sugar is dissolved. Stir in the berries.

Sprinkle the streusel in an even layer over the bottom of the tart shell. Spread the berry mixture on top. Place the tart on a sheet pan. Bake 30-40 minutes, until just set. Remove from the oven and place on a wire rack to cool completely.

Sprinkle the edges of the tart with powdered sugar—if desired—just before serving.

If you like streusel as much as I do, you can sprinkle some of the baked streusel on the top of the tart after it comes out of the oven.

If the streusel seems like too much trouble, just leave it out. I've made the tart without the streusel under the berry filling and it was just as good. The bottom crust probably stays crisper longer with the streusel, but at my house the tart disappears before the crust has any chance of becoming soggy.