It makes me sad when I see an empty wedge of pie crust on someone’s plate.  Crust should be delicious in its own right, almost as satisfying as when accompanied by a mouthwatering filling.  You may think of the filling first, but pie is not pie without the crust.

Pie crust has the reputation of being difficult to make, and I admit I was afraid of it for years. While putting it together requires close attention, once you know how the dough should feel at each step of the way, the process is quick and easy.  I recommend making and baking 3 or 4 crusts in a row–not all on the same day, but start to finish, and close enough in time so you can remember what worked and what didn’t.  Fear of pie crust is mostly psychological.  Say it out loud: “I can do this!”  Shout it from the roof tops.  Be confident.

The following recipe calls for butter.  I think butter tastes best, but you can experiment with substituting some or all of the butter with shortening, lard or coconut oil. I have also successfully substituted some/all of the white flour with whole wheat pastry flour (see the note at the end of the recipe). The result will be slightly different with the substitutions.

The most important things about making pie dough are the following:

Work quickly, but don’t overwork the dough. Use a light touch.

Press the dough gently into the shape you will be rolling out—a disk for a round pie, a square for a square or rectangular pie. Wrap the dough in plastic and gently press the dough again.

Chill the dough before rolling.  This allows the moisture to migrate through the dough and relaxes the gluten so that it is easier to roll out.

Dust your counter and rolling pin with flour before rolling.  Roll the dough from the center towards the edge—but don’t roll over the edge.  Turn the dough an eighth of a rotation with each roll.  Lift the dough up often to make sure it isn’t sticking.

Chill the dough again after it is shaped and in the pan, which will harden the butter and prevent shrinkage.

Homemade pie crust is so much better than frozen store bought.  Learn how to make a good crust, make your friends smile.  Eating pie should be a lick-the-plate experience! 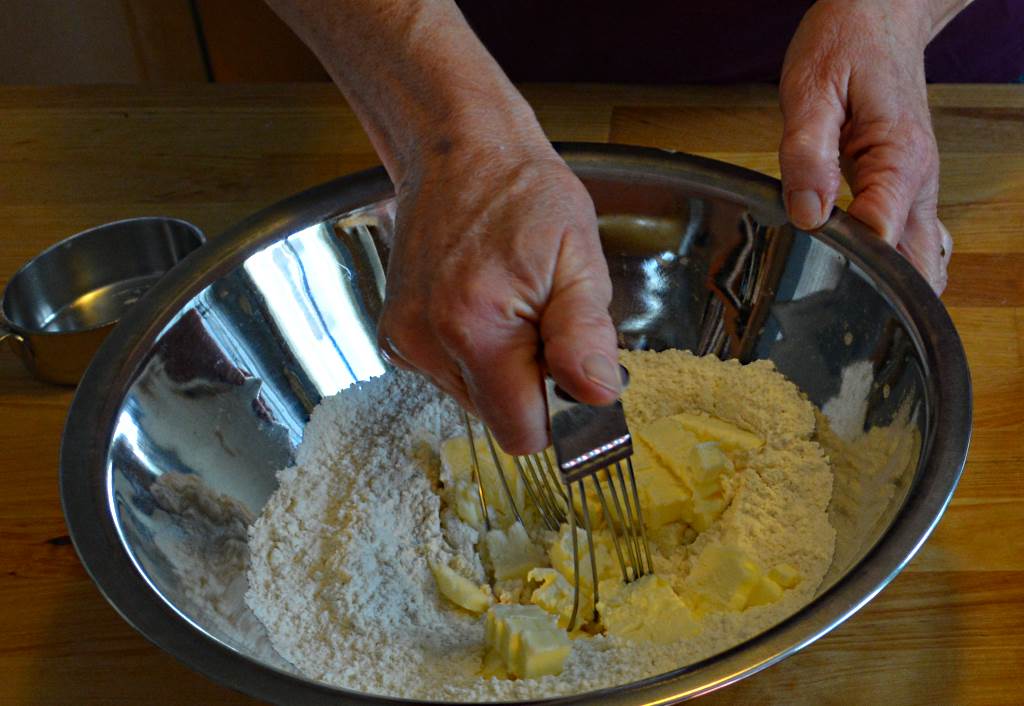 Cut the butter into the dry ingredients with a pastry blender (seen above), with two knives, or, if you have cold hands, with your finger tips. The mixture should have irregular  pea sized pieces of butter dispersed in the flour. 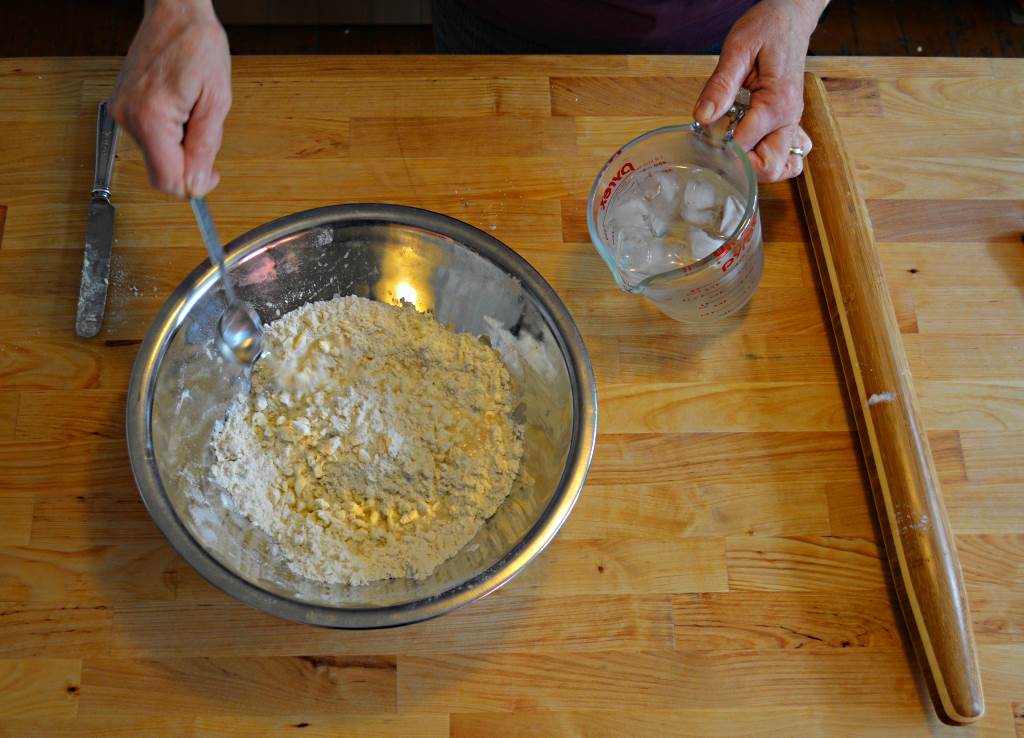 Add the ice cold water starting with 5 tablespoons and adding more if necessary. Be careful not to get any ice chips into the mixture. 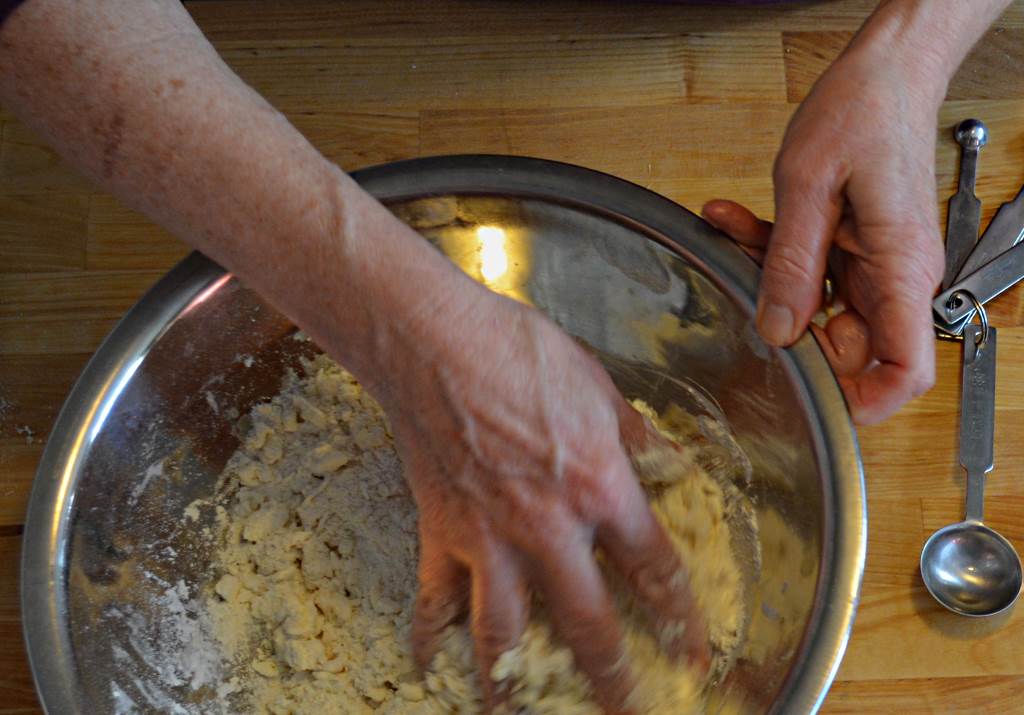 Toss the water and flour mixture together with a fork and mix gently with the tips of your fingers until you can’t see any completely dry patches of flour. At this point, it will only hold together if pinched. 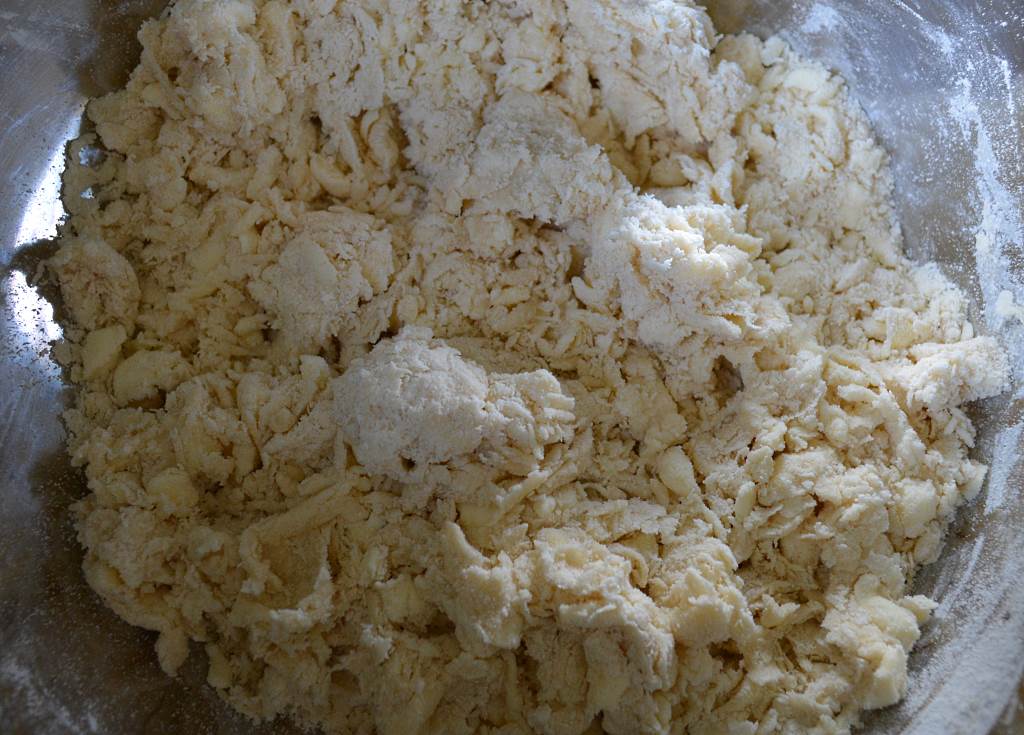 You should have a shaggy dough. 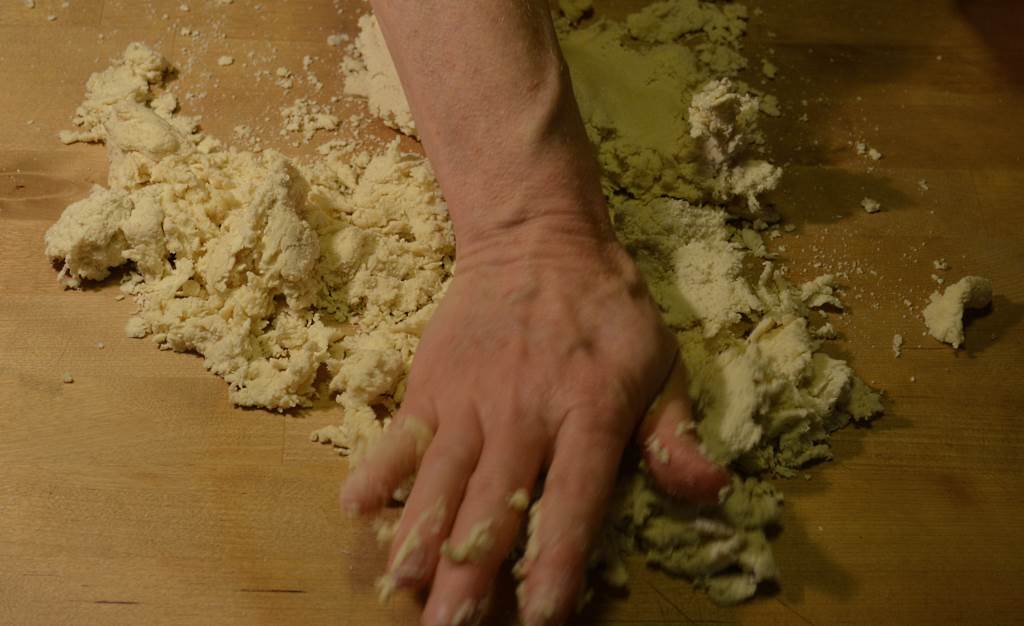 Quickly smear some of the bigger pieces of butter away from you with the palm of your hand. Three or four times is plenty. It will still be somewhat shaggy. You aren’t fully emulsifying the butter into the flour mixture–like you do with tart dough. 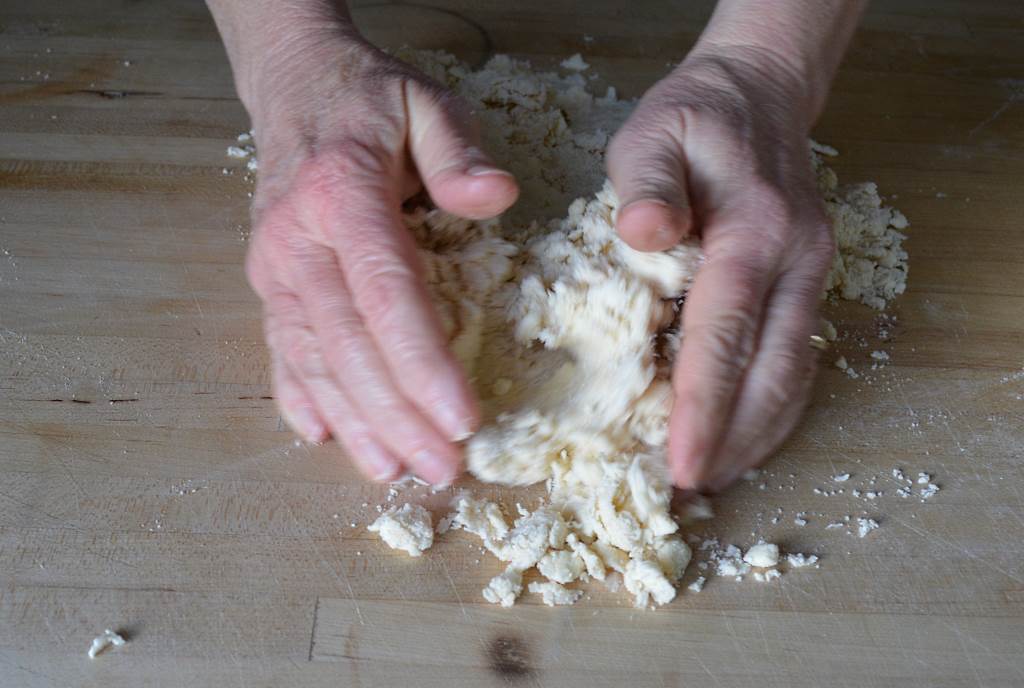 Gather the dough into a mound. 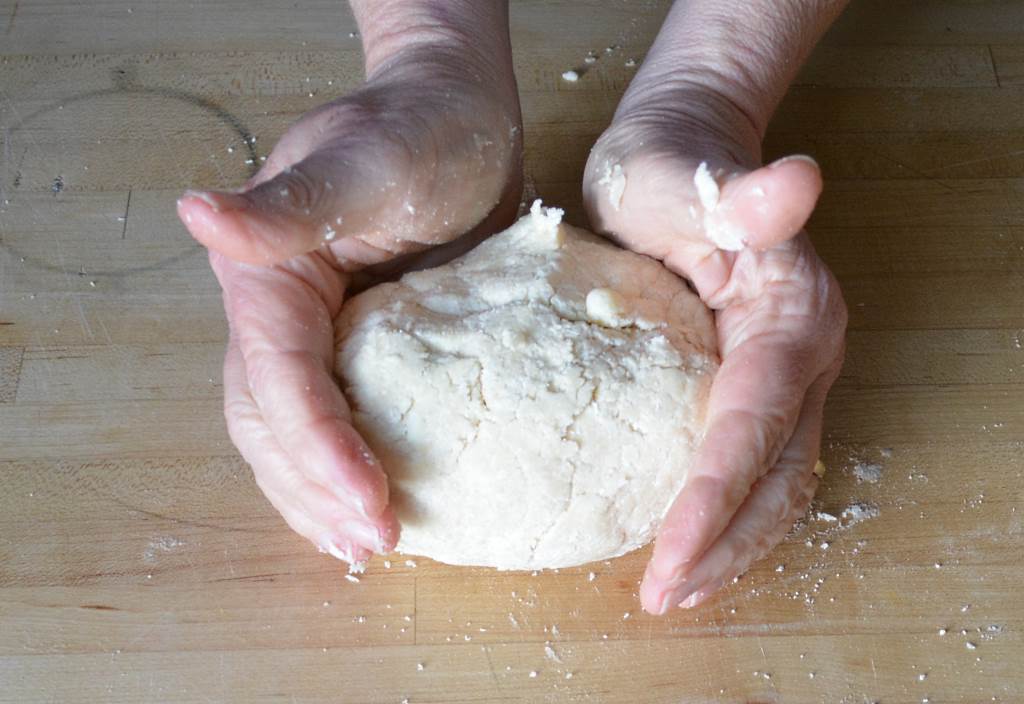 Form it into a ball. 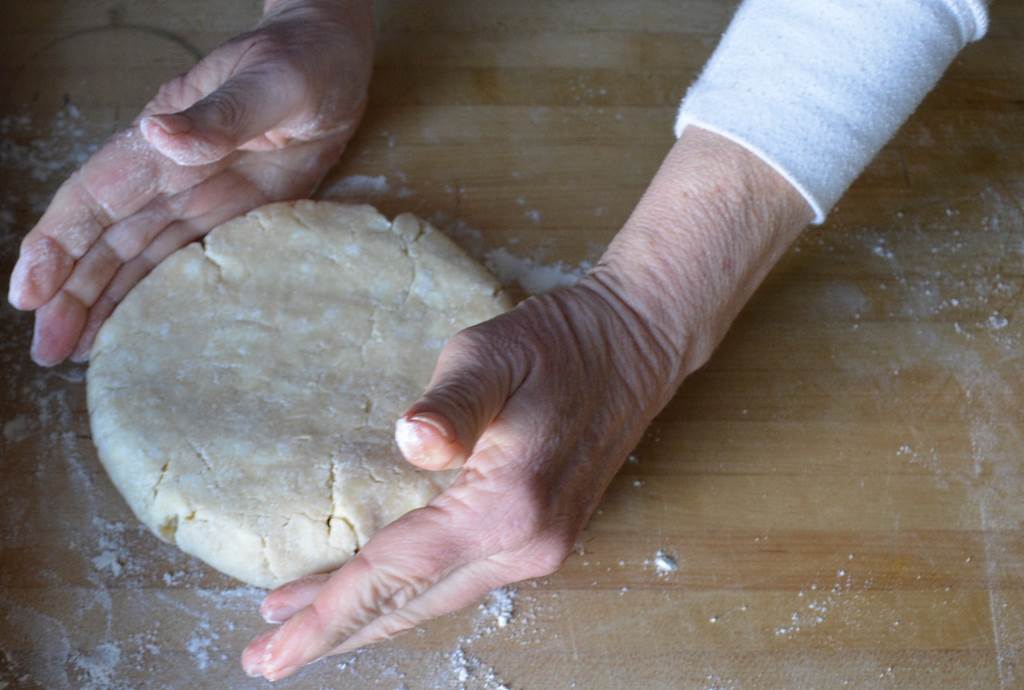 Flatten the disk keeping the edges round. Notice the bits of butter that are not incorporated into the dough. As the butter melts steam is produced which causes the dough surrounding the butter to rise and separate, creating a flaky crust. 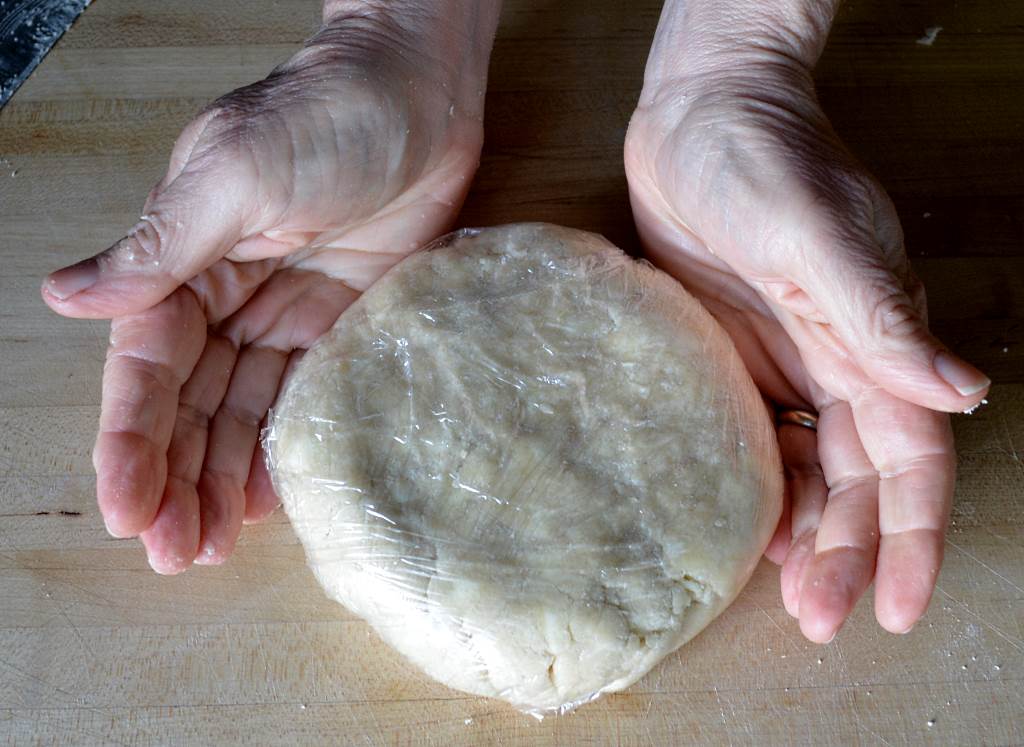 Wrap the disk in plastic wrap. 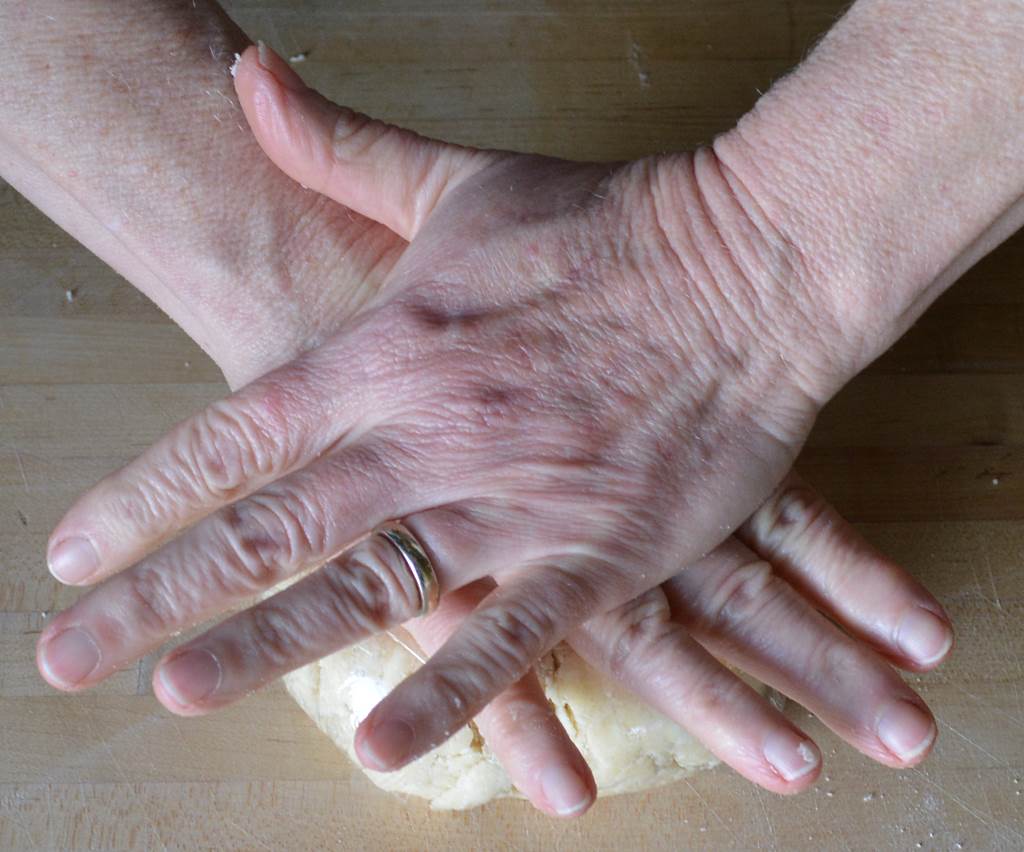 Gently press the wrapped dough with the palms of your hands to make it even flatter. 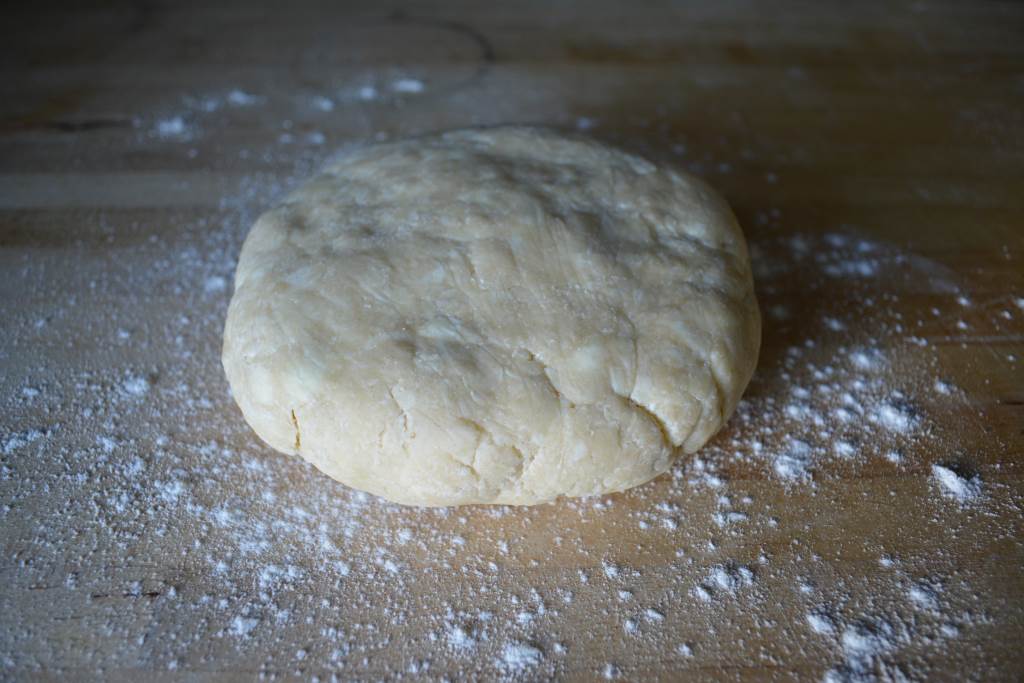 Flour your board before rolling. 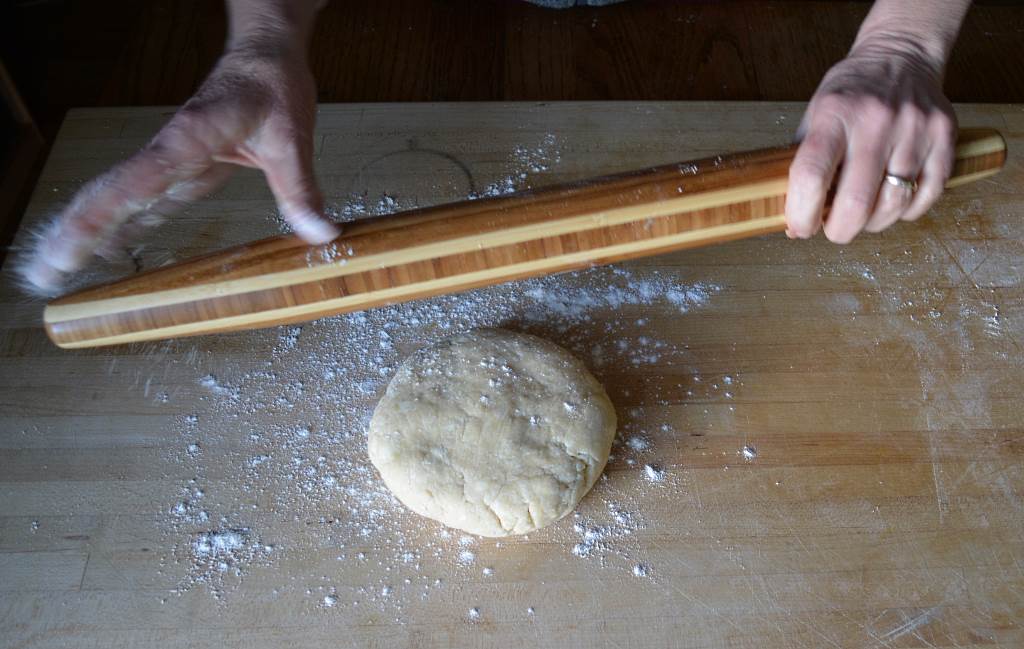 Flour your rolling pin, too. 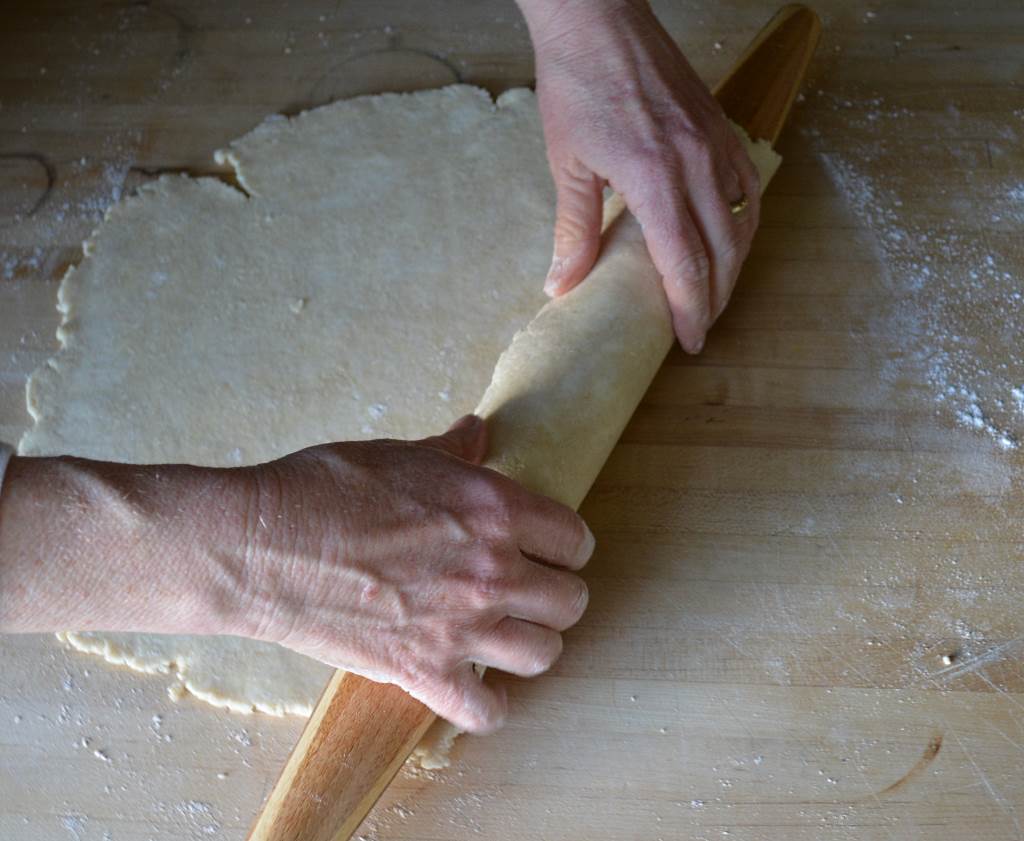 Roll the dough onto the rolling pin to transfer to the pan. 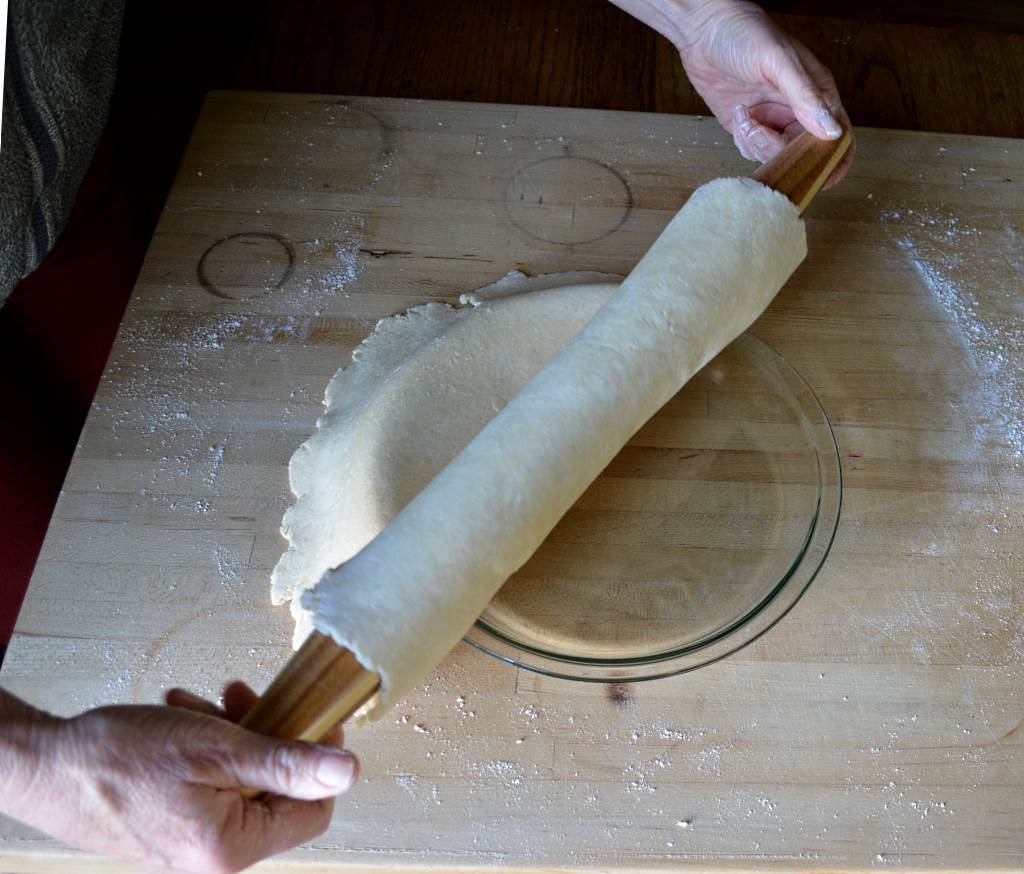 Then unroll onto the pan. 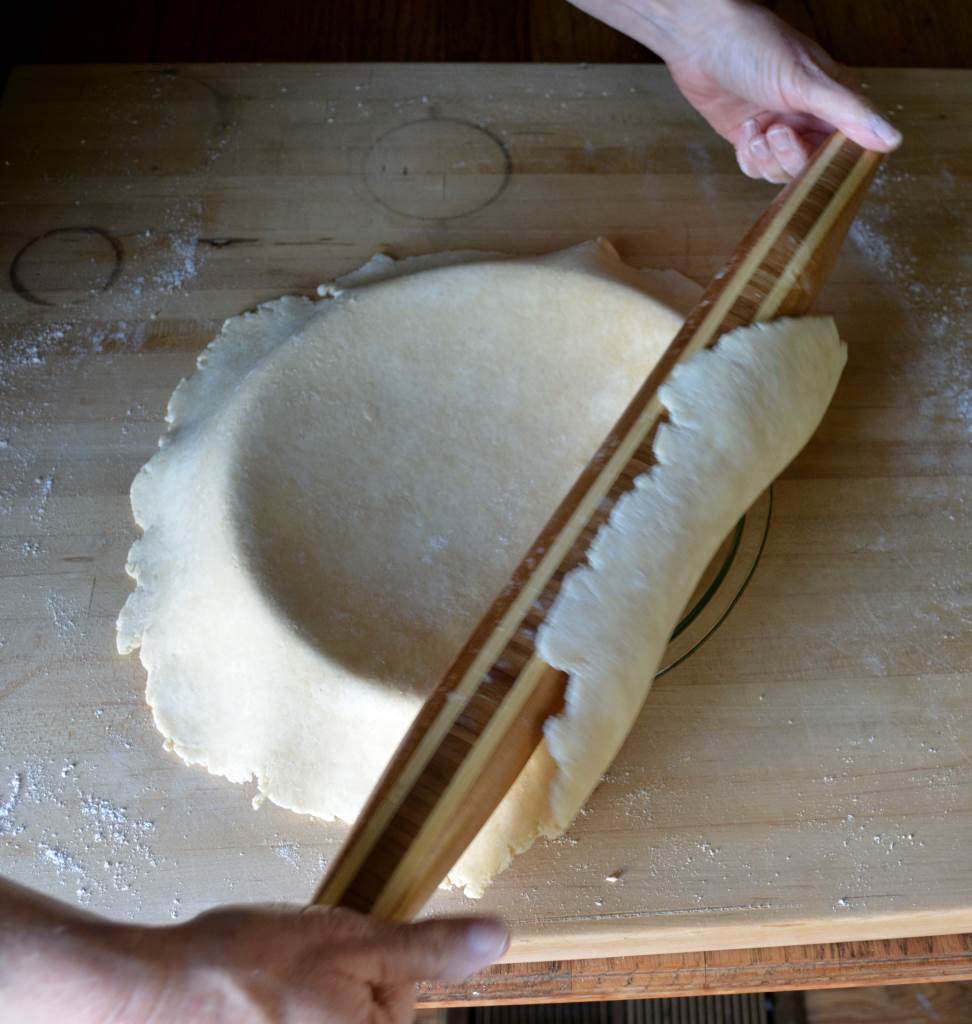 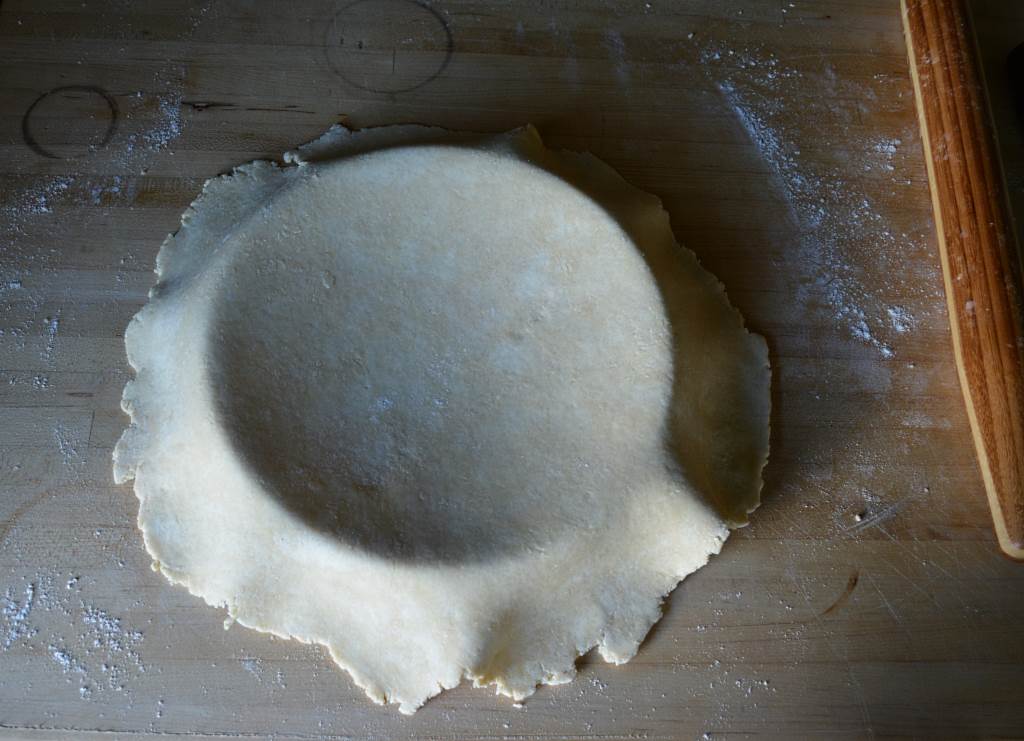 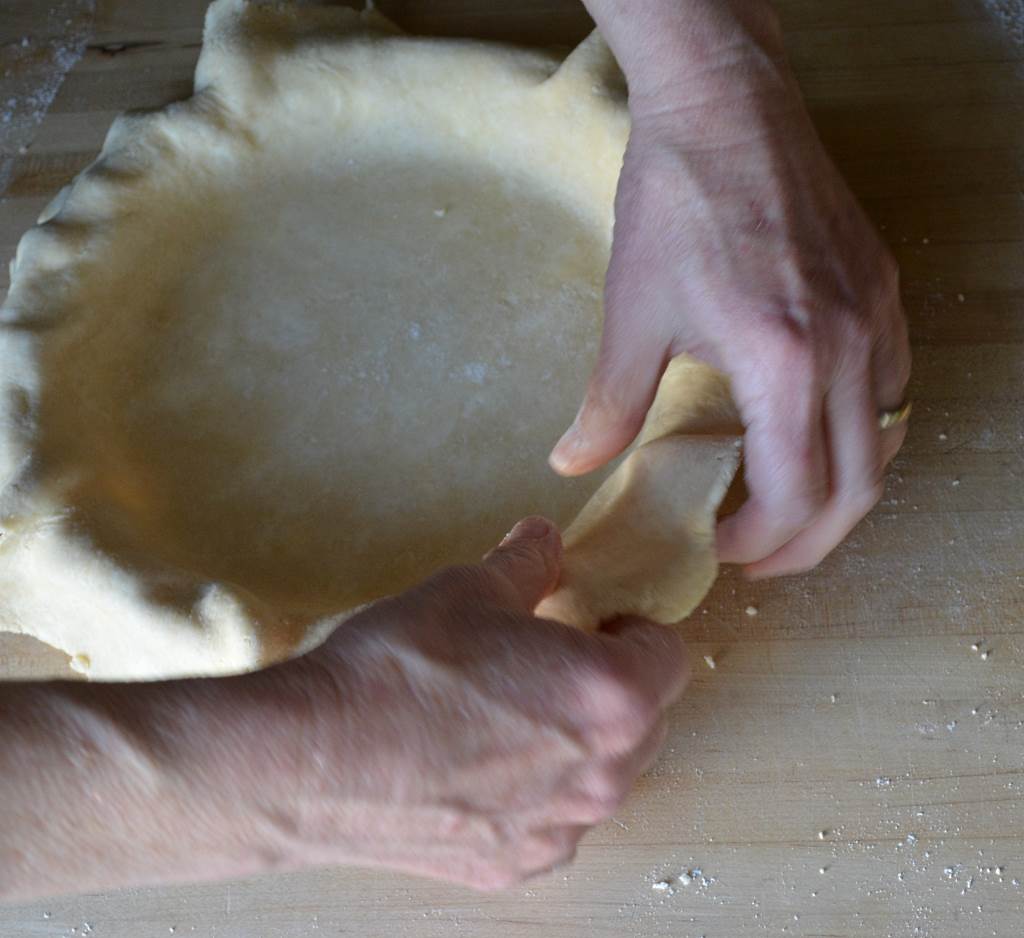 Lift the edges of the dough up and tuck the dough tightly into the edge of the pie pan. 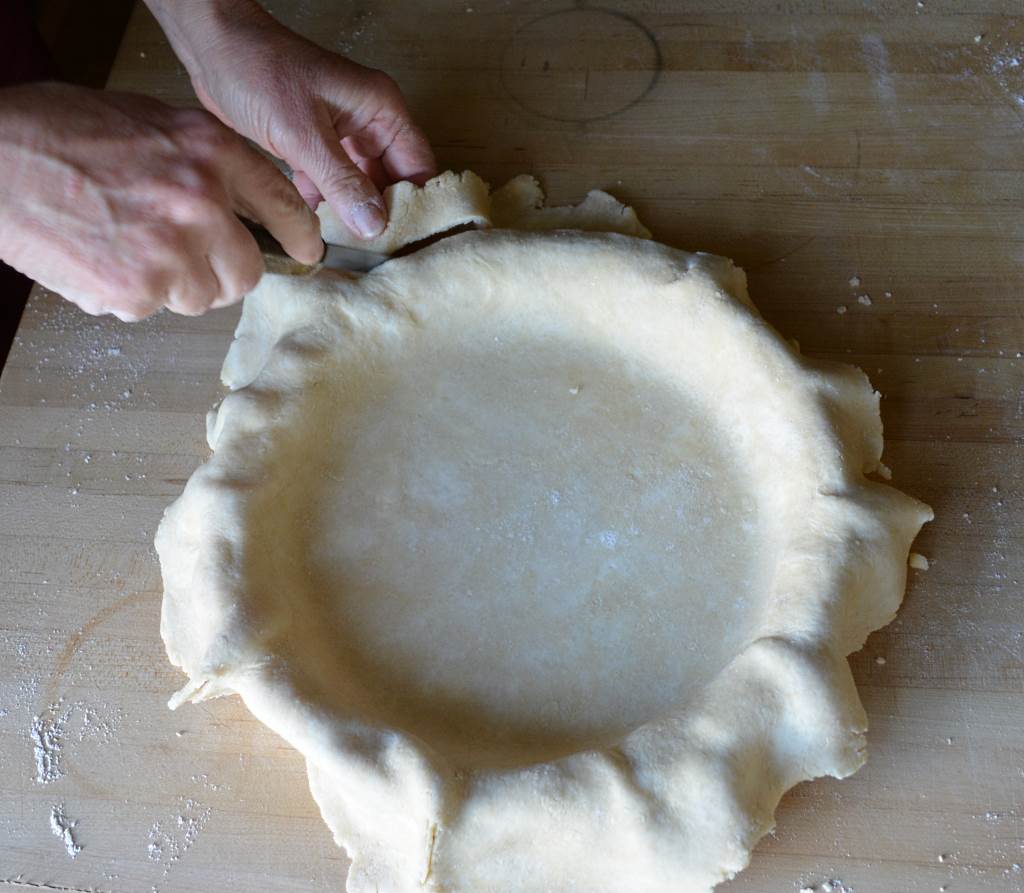 Trim the excess dough to about 1 inch overhang, with either a paring knife or kitchen scissors. 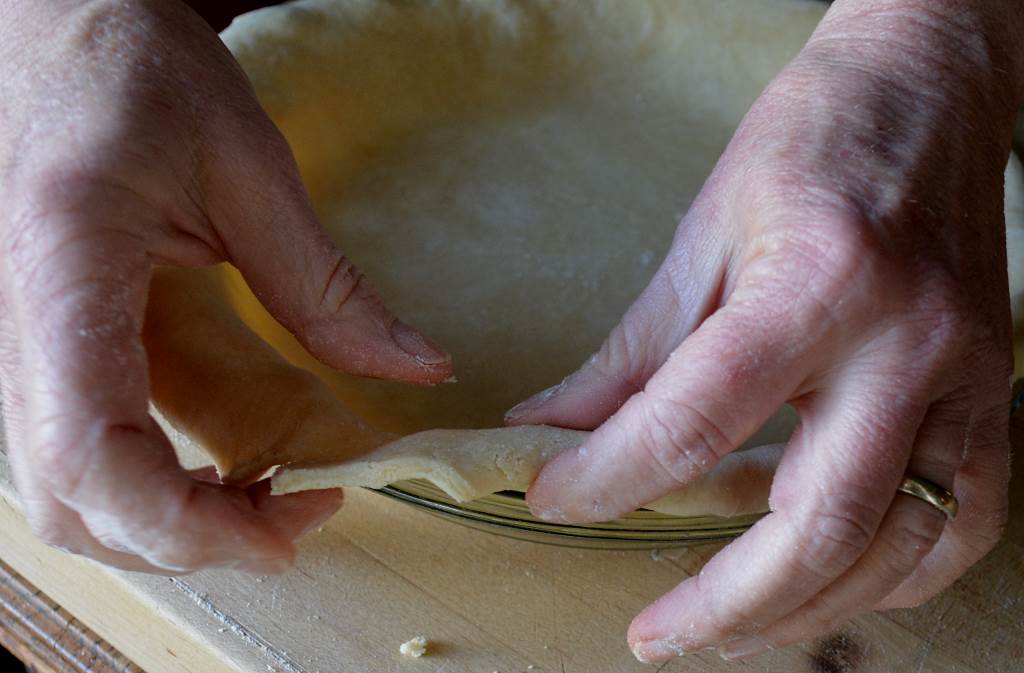 Roll the overhanging dough under, all the way around the pan. 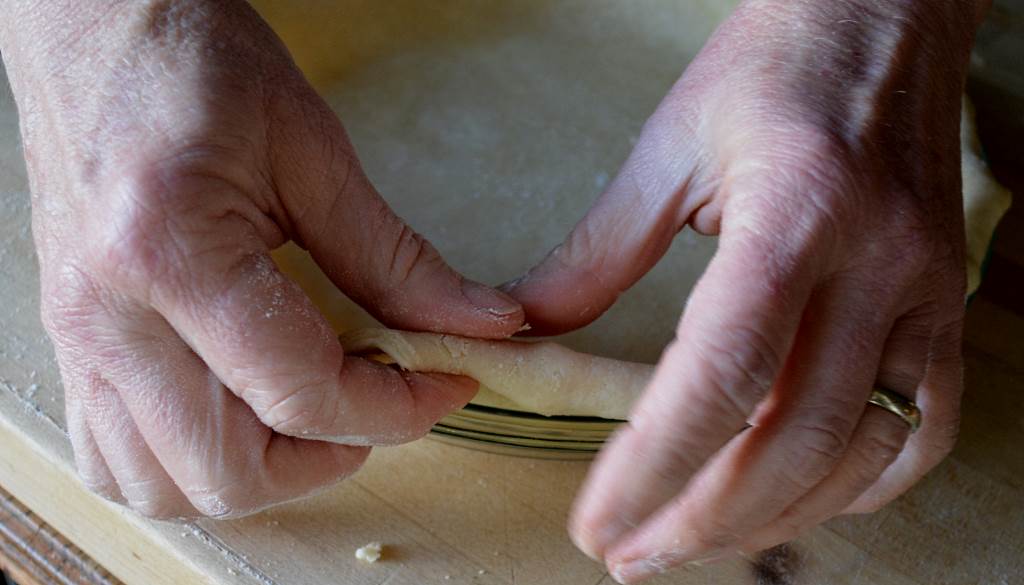 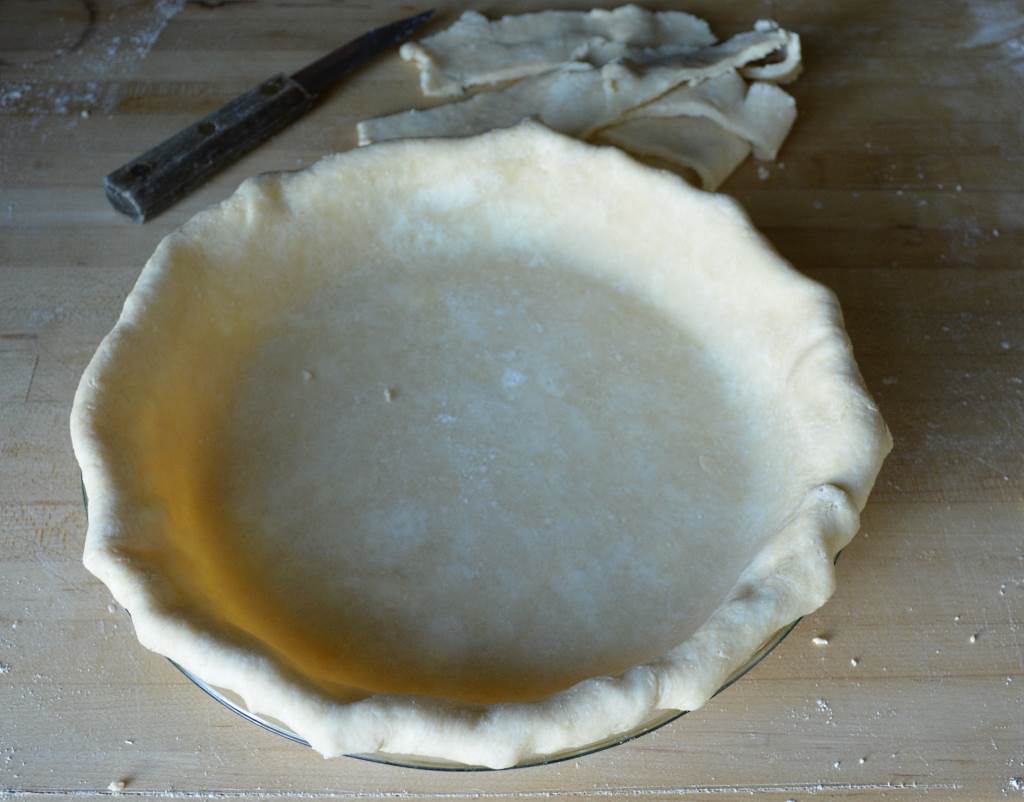 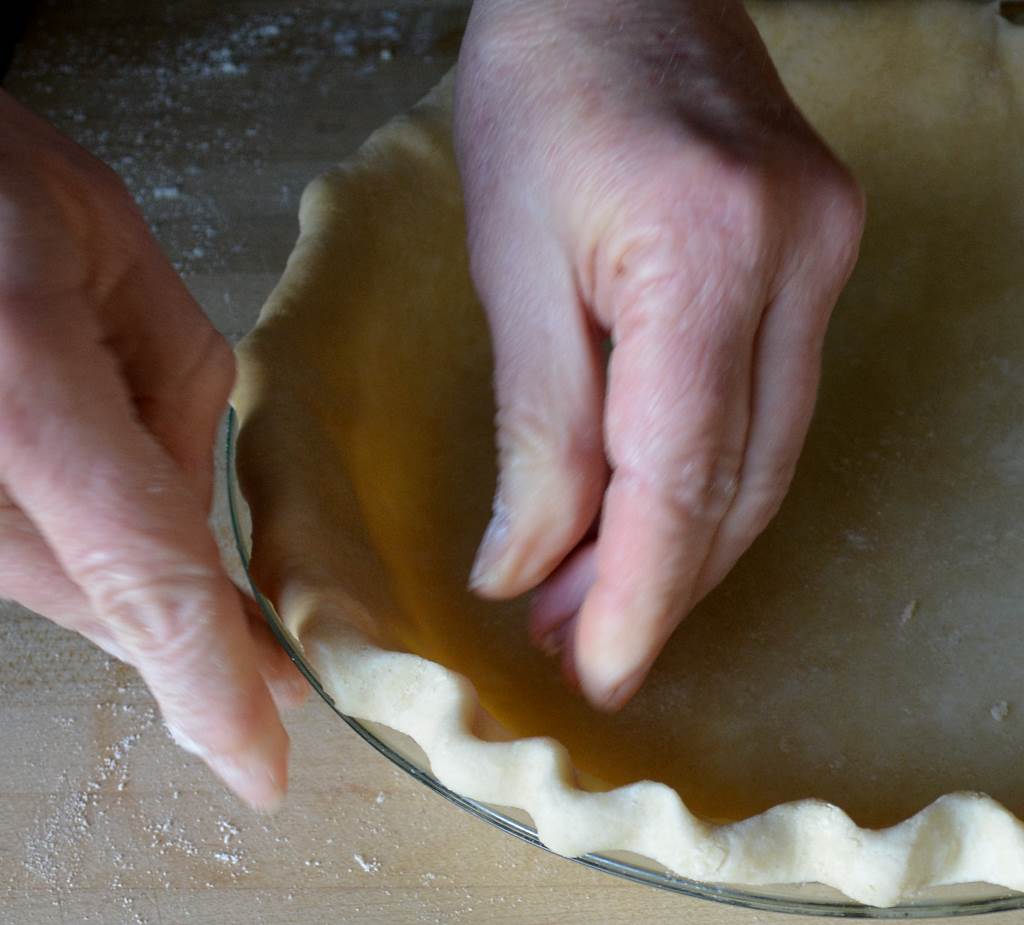 Begin crimping the dough by using  your outer index finger to press the dough into the space that your thumb and index finger create on your other hand. 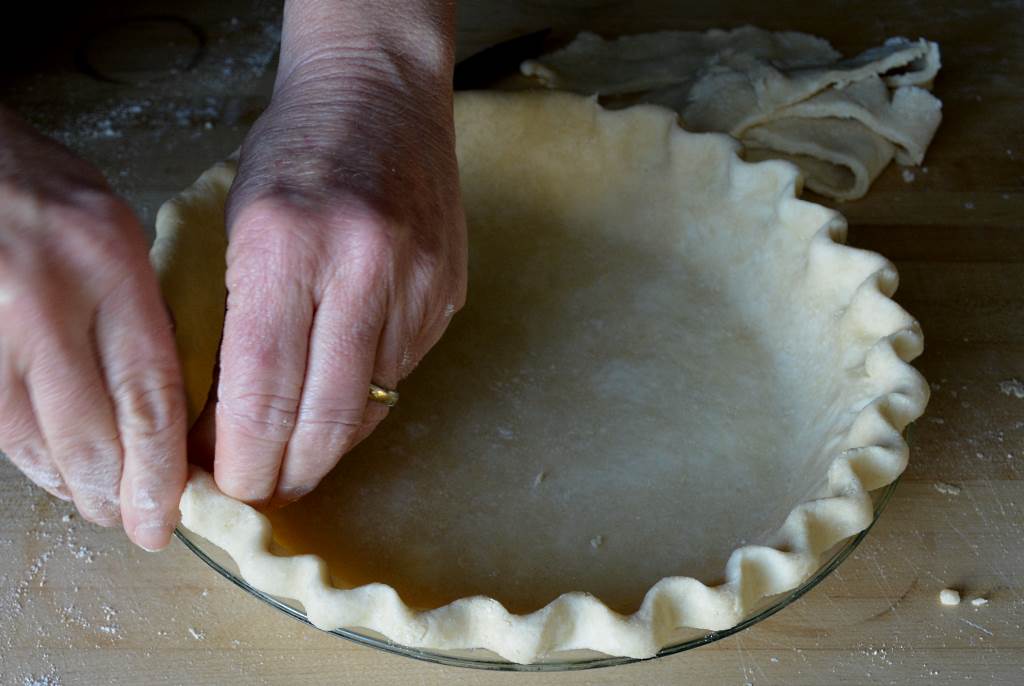 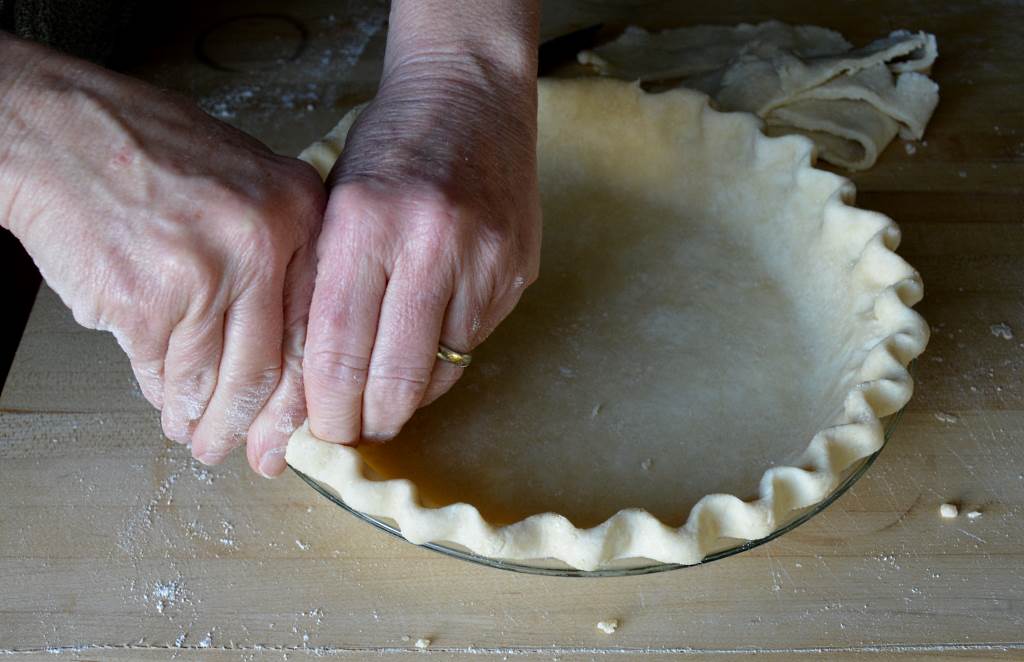 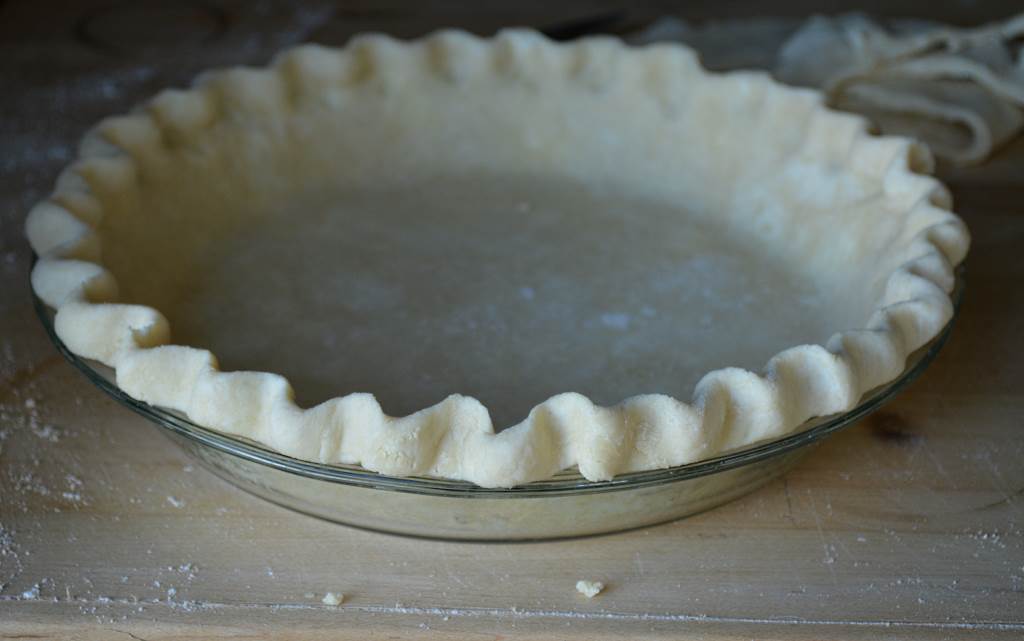 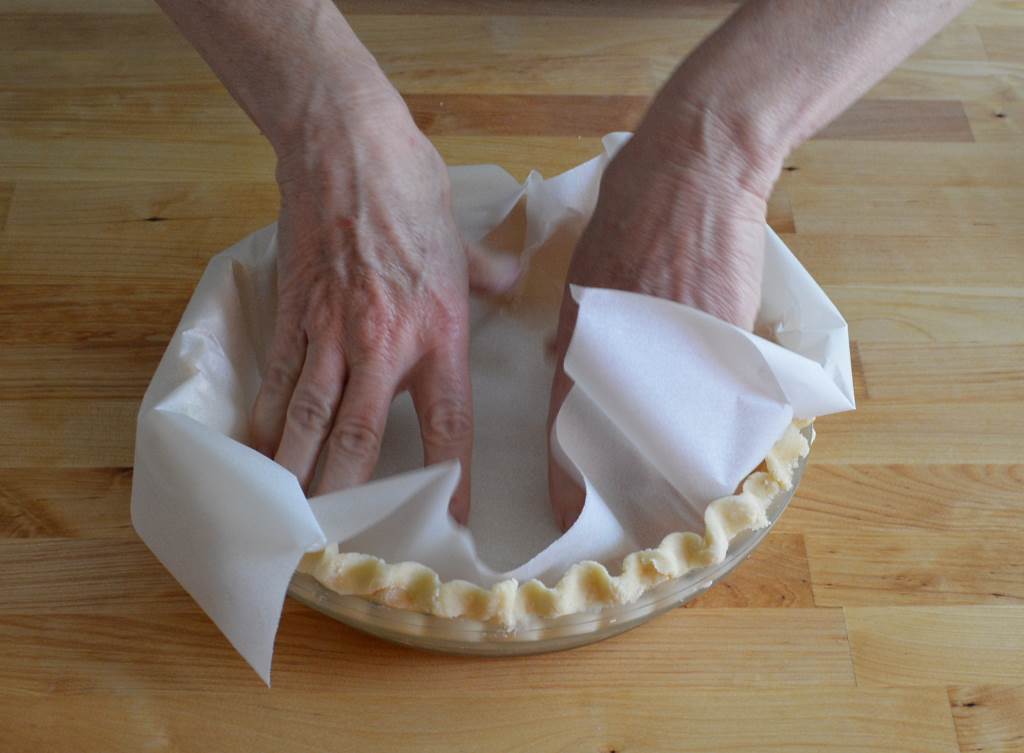 Tuck a piece of parchment paper into the chilled pie dough. Make sure the dough is very cold or frozen before hand.

Pour pie weights into the parchment lined pan. I like to use lentils or rice. Make sure you fill the pan all the way up to the top to keep the dough from slipping down the sides while it bakes. 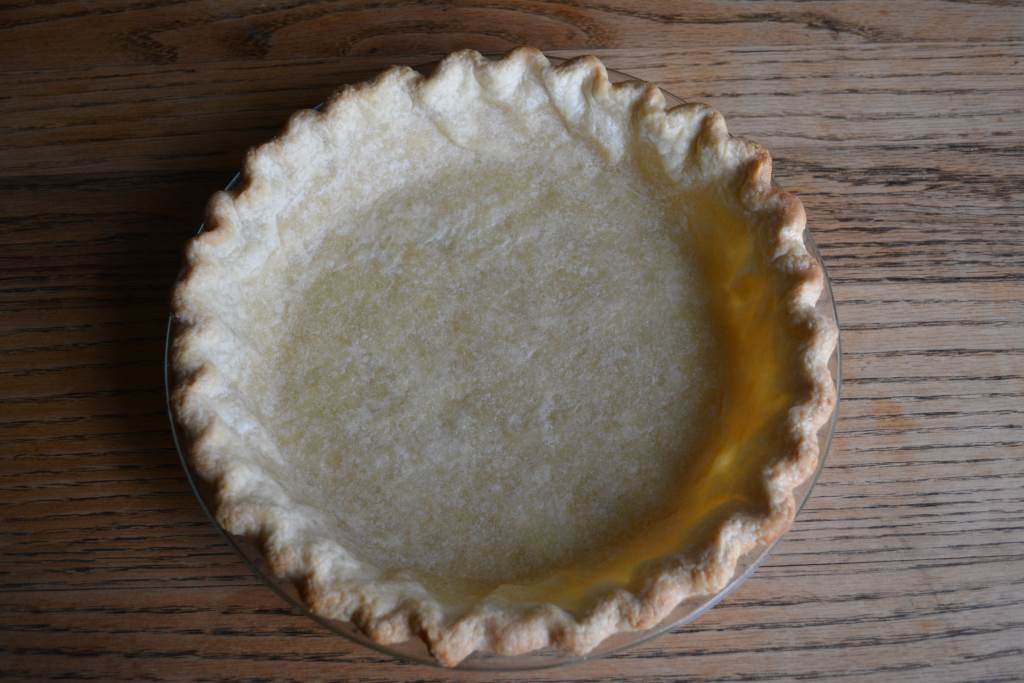 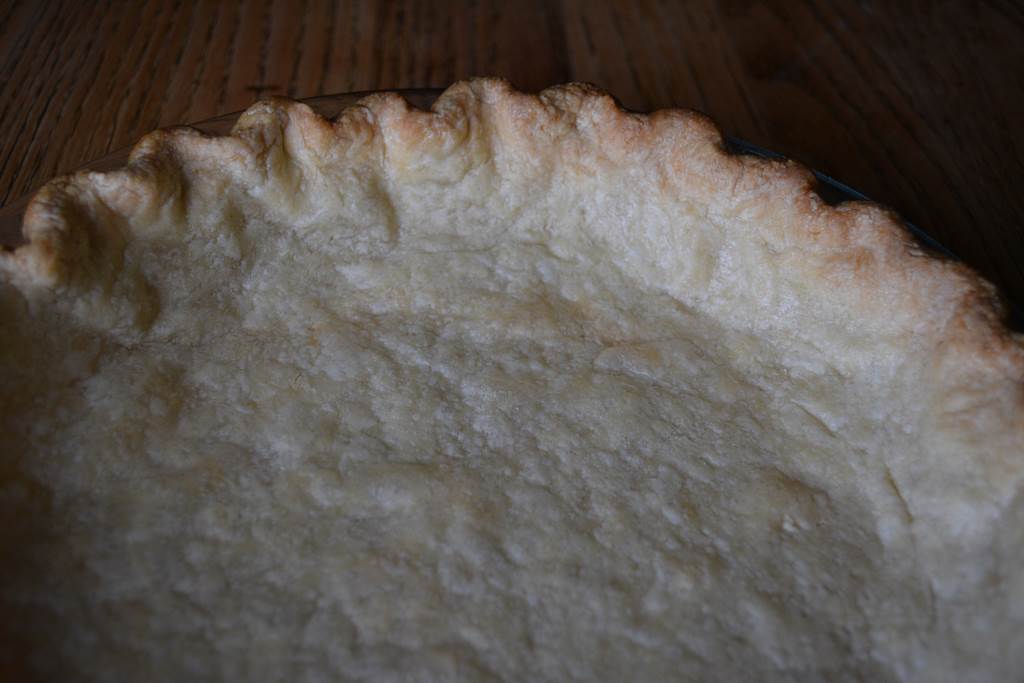 Bake until the crust is dry, blistered and golden brown in places. I use a glass pan so that I can lift the pan above my head and look at the bottom through the glass. It should be uniformly deep golden brown underneath. 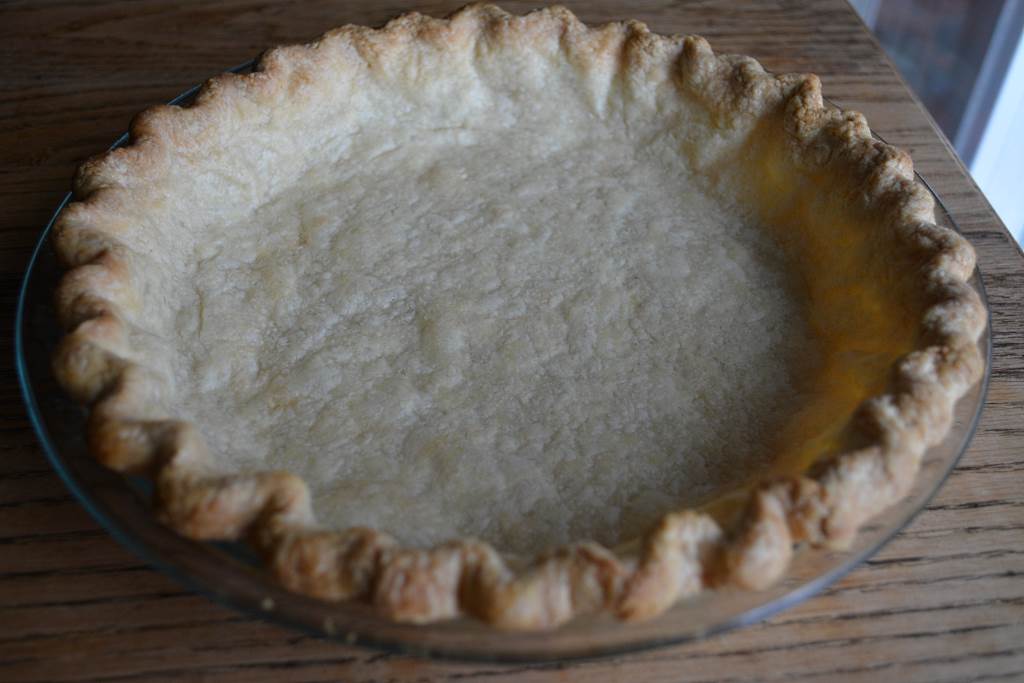 To make the pastry, mix the flour, salt and sugar together in a bowl. Cut in the cold butter with two knives, a pastry blender or cool finger tips and blend until the mixture looks like uneven breadcrumbs with some pea sized pieces of butter. Don’t fully incorporate the butter into the flour mixture.

Add 5 tablespoons of the ice water. Mix with the fingers of one hand (or with a fork if you have warm hands) until you get a shaggy dough—the dough should not have come together yet, but if you pinch it together it should hold its shape. If the dough seems too dry, add up to one additional tablespoon of cold water.

Turn dough mixture out on the counter and, using the heel of your hand, push small bits of dough about 6 inches up the counter. You want to smear some of the butter into flat pieces— but not fully incorporate it into the flour. This step only takes a minute. You will only touch some of the dough. The goal is to leave shards of butter in distinct pieces. Steam is produced when the water in the butter melts and pushes the dough apart leaving pockets of air that result in a flaky crust.

Mound the dough back together, scraping any bits off the counter, and press into a flat disk. (Form a square dough package if you are making a square tart.) You should see unincorporated pieces of butter in the dough.

Wrap in plastic wrap and refrigerate at least 30 minutes. This is an important step, as it allows the water to passively, and evenly, hydrate the dough and also helps relax any gluten that may have developed while handling the dough.

Flour your counter and rolling pin. Roll the dough from the middle out, in one motion, up to but not over the edge. Rotate the dough an 1/8 of a turn after each roll to prevent sticking and to keep it round. When the dough is 12” to 13” in circumference, roll it up around the rolling pin and gently unroll into pan. Lift the edge of the overhanging dough and tuck it tightly into the edges of the pie pan. There should be no space between the dough and pan. Trim the dough leaving an inch of overhang. Roll the dough under itself all the way around. Crimp the edges. Chill in the freezer until very cold, about 10 minutes.

Preheat the oven to 375 degrees. Remove the unbaked crust from the freezer, and line with parchment paper. Fill all the way to the top with pie weights (rice or lentils are the best). Bake for about 15 minutes. This is called “blind baking” because you can’t see what is happening under the parchment. When the exposed crust is golden brown, lift the parchment up slightly to see if the bottom crust is set and no longer looks wet. If it looks dry, remove parchment and weights and return to the oven until evenly golden brown.

For a crust made with part whole wheat flour:

Or use all whole wheat pastry flour!